It was year two of participating in Social Good Tech Week in San Francisco. This time, it was an honor to serve as a judge to the immensely driven, mission-oriented social entrepreneurs who pitched on the Main Stage on Friday afternoon. 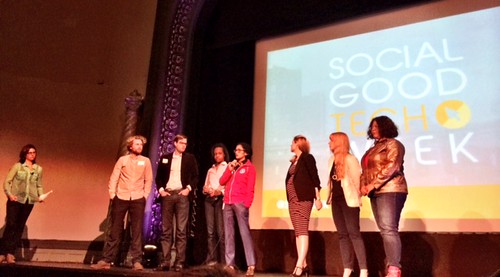 The startups and nonprofits that pitched were:

The entire experience of the workshops, sessions, and presentations was incredible and…immersive. There was a chance to connect and get to know a number of attendees, thanks to ample networking time and ahead-of-schedule timing.
Below are various forms of media, including YouTube, Flickr photos, and tweets, to get a look and feel for the Main Stage (Friday) and a workshop on Growth Hacking (Saturday).
Looking forward to following the progress of the startups who pitched!

If you notice things looking a little greener at a certain time of year in New York, Los Angeles, San Francisco, Chicago, or Seattle, it could be more than the changing seasons…it could be the annual Green Festival.

These annual gatherings started a decade ago and have been growing in force. Green Festivals bring together thought-leaders, companies, non-profits, and the community to focus on issues such as sustainability, reducing carbon footprints, and finding innovative ways to build a greener economy.
Whether you are a Green Festival novice or a seasoned pro, here are a few useful facts to know about the mega eco event.
6 Things to Know About the Green Festival

1. Green Festival is the largest sustainability event in the world.

2. Green Festival is the only green event that screens exhibitors for their commitment to sustainability, ecological balance and social justice using Green America’s green business standards.

3. Green Festival gets closer to being a zero-waste event each year

4. Even Web-Hosting by Green Festival is environmentally-friendly—100% Solar Web Hosting by AISO

The Green Festival Comes to San Francisco This Weekend (Nov 12-13, 2011)
…and Innov8Social will be there!
I will be introducing speakers and panelists at the Sustainable Home & Garden pavilion throughout the weekend. Drop by to say hello and sit in on interesting talks from eco-friendly home products to tips and techniques to cultivate a sustainable garden.
See a full schedule of events here.
Get in to SF Green Festival for Free
Here are a few ways to get **FREE** tickets to the SF Green Festival.
Hope to see you there!(Note: you can see photos from the event here)
November 11, 2011/0 Comments/by neetal
https://www.innov8social.com/wp-content/uploads/2011/11/greenfestival11_image.jpg 200 178 neetal https://www.innov8social.com/wp-content/uploads/2018/05/innov8social_logo_gray1.1.png neetal2011-11-11 20:14:002015-08-03 01:52:056 Things to Know About the Green Festival + 15 Ways to Score a Free Ticket! 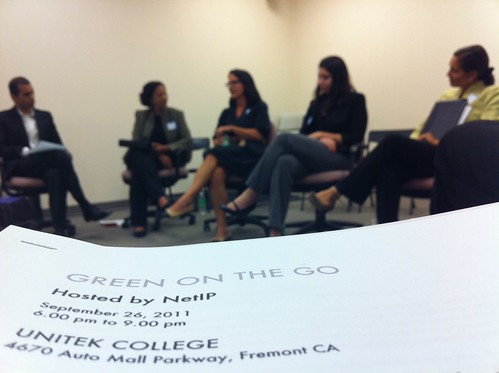 Perhaps no one has felt the impact of Solyndra’s recent shutdown more than the city of Fremont, California, where the solar technology firm was headquartered. Drive northbound on the 880 Freeway and you will see not one, but two giant buildings designed to house the manufacturing operations of the company.
Green on the Go, by NetIP
So it’s no wonder that the Solyndra story framed NetIP’s (Network of Indian Professionals) open discussion held in Fremont this week. Titled “Green on the Go”, the panel discussion was organized by NetIP board member Rishi Chopra, moderated by Fremont City Councilmember Anu Natarajan and featured panelists from various sectors who spoke on the changing role of green technology and how cities can achieve building local, sustainable communities where residents can live, work, and play.
The Panel
The panel included the following speakers:
Anu Natarajan (moderator). Elected to Fremont City Council in 2006 and holding degrees in architecture and urban design, she is active in various green initiatives in Fremont and envisions the city as a hub for green technology. She is heading up the “Realizing the California Dream” projects of the American Leadership Forum in Silicon Valley.
Leslie Bar-Ness. Leslie served as Director of State and Local Government Affairs for Solyndra until the company’s shutdown earlier this month. She previously served in Governor Schwarzenegger’s administration in the role of Deputy Director in Silicon Valley.
Anne Smart. Before joining the Silicon Valley Leadership Goup in the role of Associate Director of Energy and Environmental Policy, Anne developed legislation to increase renewable energy use and enable shared savings programs as a fellow in the Delaware State Senate.
Jessica Garcia-Kohl. In her role as Director of Development & Public Affairs for the Housing Trust of Santa Clara County, Jessica works on home affordability issues. Previously she served as a senior policy analyst for the Mayor of San Jose.
What They Said
Panelists discussed a number of issues related to green technology in the San Francisco Bay area.  Bar-Ness recalled her experience at Solyndra and spoke about some of the manufacturing challenges faced by solar manufacturers in California, especially from China. Anne Smart introduced a few key initiatives such as California’s renewable portfolio standard—the most aggressive in the country– and initiatives such as state green banks to invest revenue from cap & trade in green technologies.Garcia-Kohl emphasized the need for affordable housing the Bay Area, and cited an increase of 220K individuals as projected growth of Santa Clara County in the next 20 years. She also redefined “low-income” stating that individuals making under $107K can still be considered for a program through the Housing Trust of California.
Councilmember Natarajan sketched a redefinition of the American dream. Instead of homes with yards and white-picket fences, she envisions vibrant ‘village’ communities with easy access to work, food, and entertainment–and with special attention to sustainability, utility, and top-notch design.SB 375, with its focus on lowering greenhouse emissions and supporting public transportation infrastructure was discussed.In her concluding remarks, Councilmember Natarajan announced a way to join the discussion on California’s budget. She is organizing an event titled “California Budget: New Reality, New Possibilities” on Thursday October 6th from 4-7pm at the Tech Museum in San Jose.
September 27, 2011/2 Comments/by neetal
https://www.innov8social.com/wp-content/uploads/2011/09/6189350518_d03a1ee309.jpg 374 500 neetal https://www.innov8social.com/wp-content/uploads/2018/05/innov8social_logo_gray1.1.png neetal2011-09-27 16:16:002015-08-03 04:32:52Solyndra and Beyond, NetIP Talks Sustainability & Policy with a Panel on Green Tech