This is a guest post by Anthony Pineda, Founder of Creatrix Institute. Read more in his interview here.Hip-hop music saved my life. It provides a way to critical analyze environments, motivations, and one’s sense of Self. The fact that hip-hop transforms is not a hidden aspect to the culture, yet scholarship has yet to provide the lens to build upon this tenet. As I build a framework to breakdown hip-hop within a theoretical framework that sheds light on a term I believe will usher in new scholarship, notably “transformative hip-hop,” I strive to provide a new way to see hip-hop based education (HHBE, a termed coined in Schooling Hip-Hop, 2013). 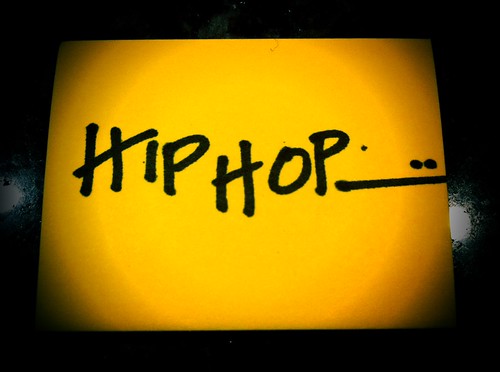 Ideally, hip-hop can offer a rich assortment of benefits to the listener. Hip-hop provokes critical thinking and offers ways to gain knowledge (the 5th element of hip-hop). I have chosen to walk a path that is hip-hop. At first when the ‘call’ came to me I assumed the path of an emcee. It is typical that people see hip-hop as an art form and that the only path may be that of a musician in the field, yet I have carved out a path with hip-hop that looks beyond the music. I am a practitioner and a scholar who feels hip-hop deep within my being.
Decoding lyrics fosters critical consciousness by building skills in reading and writing. These narratives in hip-hop music facilitate a way to emotionally connect with the artists and emotionally develop within the individual. In this piece I am writing I have given three distinctive songs that not only transform consciousness, when studied, they also provide a lens to construct reality. Let’s examine these tracks:

So this song is their signature energy track, high energy and loaded with complex wordplay. What makes it transformational is their ability to create stories that require a lot of attention. It affirms all the artists determination and staying on their genuine paths.

Zumbi of Zion I at 46 seconds says, “Get clear, I am free, lightin’ up yo dome; leave the speaker blown…….spit obsidian” His affirmation about becoming free through his music and activating the mind as the listener. Then confirms his own beat and the clarity he constructs his lyrics by claiming he spits sharp, which is why he uses the image of obsidian, a stone that you can sharpen and shape.

Grouch at 1:26 starts of spiritual, “I got a call, so I answer cause it rings so loud; Origin, not a cell tower, thanks no doubt” describes how music is his calling. Also exposes its origin not material by using the cell tower image. Grouch’s affirmation expands through his verse and even describes the metaphysical thinking within these lyrics. Eligh looks back at his beginning in the bay during his verse and too comes to the psychospiritual nature of the music at 2:51 with, “check my energy my calling is calling me; free falling I’m falling, free are the ways that I’m balling; callout to the angels just follow me home” which suggests his sense of freedom within the music. The entire song is an affirmation of remaining true to oneself and that music is a way to channel energy. Their music is a constant reminder of listening for your purpose and when you proceed to remember the vow you make to oneself.

“My Soul” by Lowkey

Then he goes on to say, “they cant use my music to advertise for coca-cola, they cant use my music to advertise for Motorola” which directly looks at the corporate sponsored music that many people in hip-hop acknowledge as limiting and destructive towards the human spirit. He says all this with six lines starting at 1:06. At 1:48 he tells us how unique he is and affirms the listener they too are just as special and unique, effectively calling out to seek purpose. Lowkey as an artist has made a unique contribution to hip-hop from the UK.

He often laces his lyricism with political and socially charged material in such a way that the listener views the stories. Not many people in hip-hop have been able to perform such a feat, but to name a few are Tupac, Immortal Technique, and Outkast. I think even more significantly is the work he just completed last year titles “Soundtrack To The Struggle” exposes the whole systematic breakdown of political corruption. Not an easy feat, yet he provides a way to see social problems and at the same time use hip-hop as social activism.

“Caught in a Hustle” by Immortal Technique

This song is one of the greatest ever written and created. Caught in a Hustle is his way to make amends with the path he has chosen as a political activist and emcee. At 32 seconds he says “But I never lose hope, success is psychological; the world is volatile and the street is my education” explaining the power of the mind to him as a way to gain motivation. He also identifies the importance of street knowledge. AT 37 seconds he states “shaping the nation, like the blueprint of a mason” implying the hidden agenda of secret societies which only some have any idea about or even that our founding father Washington was a mason. At 43 seconds he uses an image, “I’m like the little kids on TV that dig through the trash; I hustle regardless of the way you talk shit and laugh; a lot of n***** drop science but they don’t know the Math, cause their mind is narrower than the righteous path.”

All of this is emotionally charged and we have all seen those commercials that exploit the 3rd world. The Math he is referring to is actually lessons brought forth by study within the older hip-hop sects, such as Wu-Tang. The knowledge that the righteous path is narrow is also a biblical reference and has been restated over and over. When you look at the song in its entirety the energy you feel is devoted and out of time, so to speak. He acknowledges his music is political and can in fact endanger his life.

One tremendous line at me is at 1:17 when he says, “Like Yeshua, Ben Yousef flippin through Genesis; ignorance is venomous, and it murders the soul” referencing the alternate name of Jesus and the quick reference to ignorance seem to link a way to perceive a document that has caused so much destruction through the eyes of an enlightened being. Immortal’s rhymes have normally been high and angry, yet this song reflects a wisdom that I believe he walks with. Immortal’s music is transformative in ever case. Some of his lyrics are not for the faint hearted though.

These are just a few examples and the transformative nature of these artists music can become more apparent as one listens deeply. Music now a days often is not listened to , but just played to zone out. The depth of artists today in mainstream media lacks, yet the depth of underground artists continues to flourish.

What was your experience? What emotions are elicited by the artist? How did these songs alter your thinking regarding hip-hop music and culture?

These are some fundamental questions that I employ when I “actively listen” to hip-hop. It is critical we acknowledge the power of hip-hop to teach and enhance our consciousness. After I complete this film on hip-hop’s power, I will then provide a book outlining the theoretical framework for deep analysis on hip-hop discourse.

What is more important is to get HHBE into schools with curricula that will motivate youth towards paths in higher education and paths of purpose. Hip-hop saved my life and gave me purpose. That purpose is to change the face of education and bring trust back to the student/teacher relationship.

I am hip-hop! This is the mantra we live by in hip-hop culture and this is meaning. Hip-hop is at a cross-road, and the youth are starving for meaning in their lives and in their music. The time to bring about a revolution in hip-hop is now and the consciousness of hip-hop will create the means by which this happens.