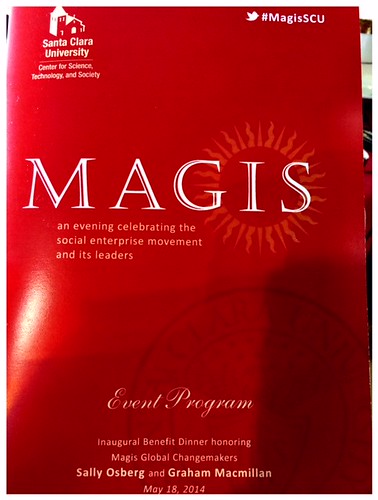 On a beautiful Sunday evening in mid May 2014, hundreds of social entrepreneurs, mentors, funders, leaders, professors, and faculty members gathered for a gala to honor two individuals in the social enterprise space as well as to further the global dialogue about mission-driven ventures.The inaugural dinner named Magis—the Latin term for “more” (i.e. as in more strategic, or better) highlighted the work of the Center for Science, Technology, and Society (CSTS) and its long-running Global Social Benefit Institute which has over 200 alumni social enterprises that have positively impacted nearly 100 million lives since the program launched over a decade ago. It also recognized and honored the work of Graham Macmillan, former Sr. Director of VisionSpring ( social enterprise dedicated to ensuring the distribution of affordable eyewear) and Sally Osberg, President and CEO of the Skoll Foundation (one of the institutions that support GSBI).Santa Clara University is no newcomer to social enterprise. As learned through an Innov8Social audio interview the Center of Science, Technology, and Society Director Thane Kreiner—-the Global Social Benefit Institute (GSBI) has a rich history in the space, and Thane’s own experience as a serial entrepreneur in the health sciences arena informs and inspires his work at CSTS. The department also hosts an annual GSBI Accelerator Showcase, which features pitches from current participants. (Coverage of the 2013 GSBI Showcase here.)

Though the Magis showcase & dinner evening was seated in elegance and dressed to the nines, one of its most glimmering accessories was the humility of its participants. From Master of Ceremonies Thane, to featured speakers, and award recipients, to the esteemed guests, there was an honesty and authenticity in engaging in value-driven work, understanding the reason behind the work, and the long and often challenging road in launching ventures that seek to improve lives in addition to employing an entrepreneurial mindset. In this space, just as with any niche, there can be a tendency to gild individual contributions or the sector itself, or brush past known challenges and failures. But the tone of Magis, perhaps due to its firm roots in the Jesuit tradition or because the presence of so many active social entrepreneurs in the evening’s program, was one of engaging in dialogue, of furthering conversations, and of finding ways to help each other better understand and support the space.

In his afternoon keynote on the first full-day of the conference (Monday, February 24, 2014), Paul shared what he has learned at the helm of Y Combinator (YC)—arguably the accelerator that catalyzed the launch of hundreds of other accelerator and incubator programs designed to spur innovation and provide an alternative pathway for thinkers and founders to become companies.  He reflected on the past decade, the kinds of founders YC has selected in the past, his changing role in the organization, and his announcement that he will be stepping back from day-to-day operations at YC.

He said that when he meets with founders he often prods them to identify their most important next task—-and to focus on doing exactly that thing.

It is apt advice for the entrepreneur and especially so for a mission-minded social entrepreneur serving multiple stakeholders.

All too often founders can get distracted, sidetracked and perhaps overwhelmed, causing them to spread ourselves thin and focus on multiple targets simultaneously. But, in practicing Paul’s advice, much of the surrounding noise dissipates and is replaced with focused attention and follow-through.

I hadn’t heard Paul speak before, and was struck by his easygoing, open style. After hearing him, I imagine this as a typical, garden-variety talk between Paul and a founder: 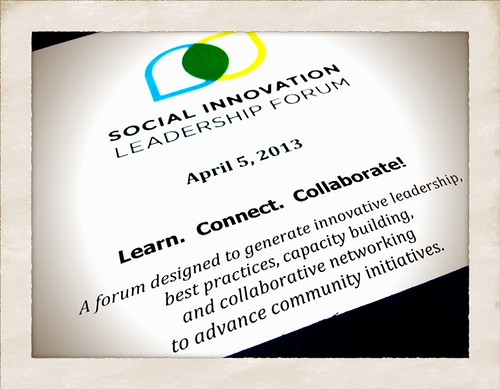 It was fascinating to see a city government as the primary host of a conference on impact-oriented innovation. Innovation–by nature–involves doses of failure. Governments, as entities, generally tend to be risk-averse in policy-making—opting for tried and tested solutions over highly-experimental ones. It was hopeful to see that governments realize that if we want the most innovative, most impactful solutions requires an ecosystem of innovation. With that comes the best of innovation (i.e. viable solutions) and its worst (i.e. huge failures). That this event implicitly acknowledged that pendulum swing was a telling sign about the reach and increasing maturity of those who embrace social innovation. 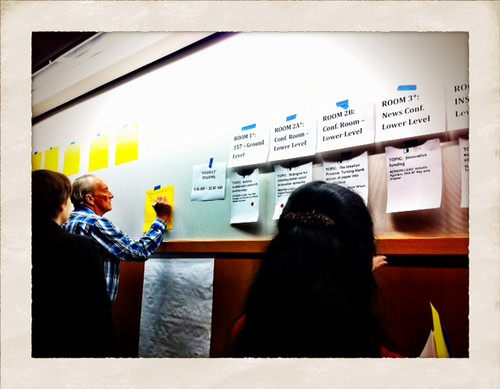 After opening remarks, attendees entered a room with plenty of butcher paper, markers, and tape to suggest new topic ideas. After making the 20 second pitch of their unconference session idea, participants voted on their favorite ideas.

Having recently co-hosted a social innovation unconference of our own recently, I was excited to try the similar problem + solution brainstorming we utilized there in this setting. I proposed a session on identifying problems we see in our local areas and identifying solutions available and how those solutions could be improved upon. About a half-dozen folks participated in the session and after introductions about our areas of interest and expertise, we dove into identifying issues we see that are ripe for innovation. The exercise was eye-opening because individuals were approaching it from very different vantage points and perspectives.  Students viewed the issues of San Jose from a completely different lens than the City Councilmember who also participated. 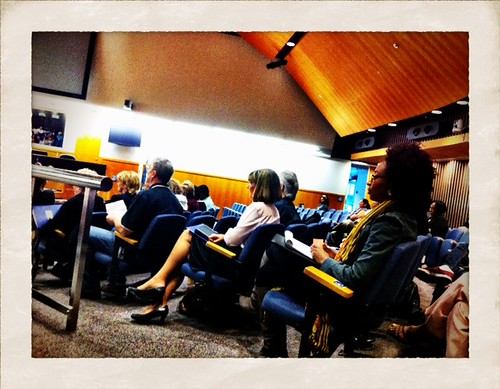 Since the session was brief, we didn’t have a chance to dive very deep into brainstorming solutions, but it was empowering to connect on the topic with a small group of people focused on identifying local issues with specificity, and creative solutions they have seen or considered.

Here are a few resources on the SJ Social Innovation Leadership Forum.