Blog
You are here: Home / Blog / social innovation / There’s Always Space for Innovation
Today we joined multiple groups of volunteers at Second Harvest Food Bank in Santa Clara to sort food that will be distributed to those in need in the Bay area.
The task
Sort these 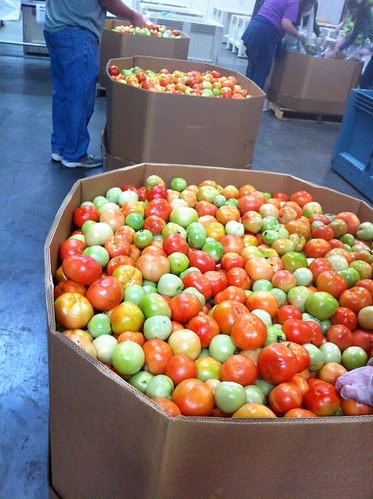 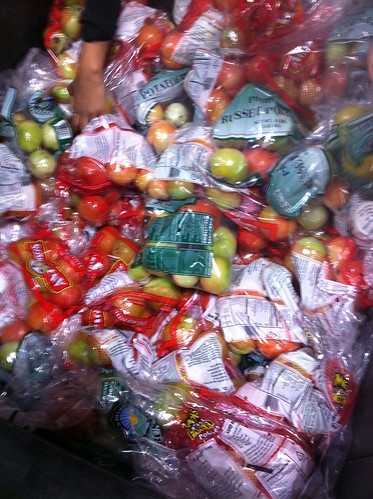 And tie the bags so they look like this 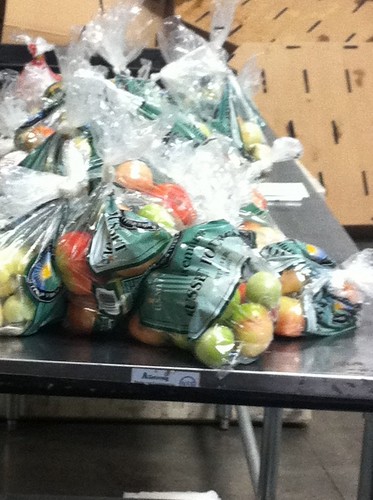 Straightforward, right?
The task presented was seemingly straightforward. But as the work started, the 50 or so folks working the tomatoes realized inefficiencies in the process.
For example, as most people began the task of bagging tomatoes and bringing untied bags to the volunteers tying and counting the bags, we began to notice a bottleneck. The bags of tomatoes were coming through much faster than the tying and counting teams could process.
Over the course of 3 hours, we came up with innovative fixes to improve workflow. A few of us joined the tying team to expedite the process. But with the flow of bags still coming in strong, someone suggested an ‘overflow bin’ so that the untied bags would not clutter the workspace (and worse, wouldn’t fall, spill, and otherwise waste tomatoes).
Within a few iterations, we settled into an effective, innovative solution. Two carrying bins. We had the majority of bag tying volunteers work through on the bags in the main bin while the overflow bin filled up. Then we would switch the large bins so that overflow bin became the main one, and the formerly-main one became the overflow bin.With these few changes we were able to expedite the sorting process, maximize the volunteer efforts, and minimize waste of tomatoes due to inefficiency.
Always space for innovation
Even if the workflow and fixes don’t make total sense, it was illuminating to see that there is always space for innovation. Even in the simple task of sorting tomatoes. And it was additionally enlightening to note that much of the real-time innovation that occurred happened organically—without meetings, or supervisory direction—it was just input from individual volunteers (who on the whole did not know each other), the willingness of other volunteers to try new methods, and the enthusiasm of getting the job done, and doing it well.
And while a few of them may need a little time to ripen, at the end of the volunteer day, we created 3000 bags of tomatoes and over 50 boxes that are ready to be distributed to people, families, and organizations in the area.
October 8, 2011/0 Comments/by neetal
https://www.innov8social.com/wp-content/uploads/2011/10/6224208018_b15967b317.jpg 500 374 neetal https://www.innov8social.com/wp-content/uploads/2018/05/innov8social_logo_gray1.1.png neetal2011-10-08 21:53:002015-08-03 03:49:38There's Always Space for Innovation 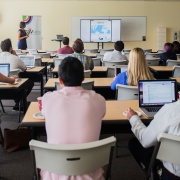